Lovecraft Country debuts on HBO tonight at 9pm EST, it is based on the novel, written by Matt Ruff, under the same name. It is a show that will blow you away with its uniqueness, relevance and perfect casting. Misha Green and Jordan Peele present a fantasy horror series, that is incredibly well written, multilayered and timely. The performances from Jonathan Majors and Jurnee Smollett, as Atticus Freeman and Letitia “Leti” Lewis will intrigue you, and will have you tuning in, week after week.

Atticus Freeman (Jonathan Majors) meets up with his friend, Letitia “Leti” Lewis (Jurnee Smollett) and his Uncle George (Courtney B. Vance) to embark on a road trip, across 1950s Jim Crow America in search of his missing father. Atticus has just returned from war and has experienced the horrors of it, as he returns home, the PTSD of the creatures lurking near the trenches continues to haunt him. He is aware of these fantastical creatures and is on the lookout when travelling to find his father. On this journey, the three of them experience racial injustice from multiple Sheriffs and the parallel of what is truly evil, is evident. 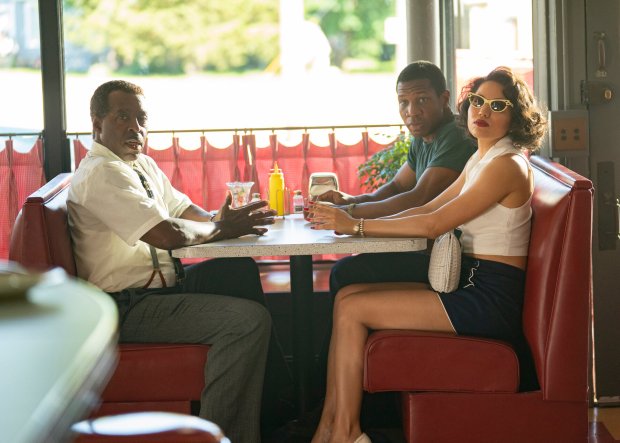 Jonathan Majors and Jurnee Smollett are both so incredible in this show. They have such powerful energies and are completely grounded in their characters. They both worked so well together and had excellent chemistry. Majors and Smollett have key moments for their characters and they will make you remember them. There’s so much depth to Atticus and Leti, they are such likeable characters and the way they navigate their own journeys in this show is amazing. They are both incredibly gifted actors and they truly shine in this series.

Lovecraft Country has such great storytelling from Misha Green, it is so incredibly detailed, that the layers of generational discrimination and injustice is the undercurrent, while the characters attempt to navigate the idea of witchcraft. It has this perfect balance of what can symbolize evil and it is up to the viewer to process it. The obvious bigotry, that is present through the police officers, in those counties, shows that even though the face of racism changes, the structured ideology is present and it must be handled.

The camerawork, teleplay and horror elements flow so perfectly together than it makes it seamless. It feels like such a perfectly crafted show because of how everything clicks together. The most important aspect of any horror piece, is the suspense and that is definitely something this show does extremely well. There are moments that will never leave your mind because of how eerie or unsettling those scenes were.

Lovecraft Country is a show that will be studied each week, as the story unfolds on HBO. It is so incredibly detailed and layered, that it will leave you wanting to know more about this world they have created. It’s a powerful show filled with great fantasy horror elements, strong writing and seeking justice for past racial indiscretions towards the Black community. Tune in tonight, for the premiere at 9pm EST on HBO/Crave.

Negroni’s are stunnin’ ❄️
“Guadagnino does highlight the morality of these characters. They do contemplate whom they eat. Someone like Maren hasn’t fed at all, and it feels like a coming-of-age story for her. The older “eater” named Sully (Mark Rylance) only feeds on people who are about to die because he can smell them. Then there’s Lee, who only feeds on bad people or people without families. The “eaters” can also track each other, which is problematic for Maren. Sully takes an interest in her out of his loneliness in finding someone he can fully be himself with. There’s a hint of desperation, that exits Rylance’s voice whenever he’s around Maren. He truly has one of the most chilling performances of the year. When Maren meets Lee unexpectedly at a superstore, they click instantly. The chemistry between Russell and Chalamet is electric, and they didn’t have to say much to sell that they were that connected. Guadagnino also knows how to capture intimate moments through glances and stolen smiles, which is what he did through Maren’s perspective. It’s visually implied that she had been longing for him the entire road trip to find her birth mother.”
“We meet a young man named Sammy Fabelman (Gabriel Labelle) growing up in post-World War II era Arizona. He discovers a shattering family secret and explores how the power of films can help him see the truth. Films are a version of the truth, a particular window to see different stories through multiple perspectives. Sometimes movies can show us what lies beneath the surface and how the mind truly works. Co-writers Tony Kushner and Spielberg craft an autobiographical coming-of-age story that incorporates family issues, mental health, and the power of cinema. It does take a bit to find its footing, but once the pieces come together Spielberg works his magic.”
“There are always standouts in an ensemble cast, even if they do have a fair amount of screen time and great chemistry. The star of this film is Janelle Monáe. She has such a presence on screen and she didn’t even have to say much. The third act of this film is where she truly shines and she steals the spotlight. The one who had the quippy one-liners and possible the most fun working on this film was Kate Hudson. It was lovely to see her back to play a tone-deaf washed-up model in this story. Johnson brought a different, more modern type of humour to this script and worked in the context of the players in this game.”
“It’s almost hard to believe that the two of them haven’t worked together until now. Ferrell and Reynolds had wonderful chemistry and bounced off of each other incredibly well. Their line delivery, slapstick comedy and timing all worked in every single scene they were in. On the one hand, you have Reynolds playing his dry sarcastic self and Ferrell channels his inner Buddy with his whimsical zest for Christmas. Sure, they act as complete opposites for comedic purposes, but once Briggs and the Ghost of Christmas Present head back to their past, they discover they’re more alike than they think. Here, they begin to understand each other and connect on an emotional level to ground the film. There’s some Christmas magic to warm the heart, but it’s those tough, intimate moments from their past that will resonate with audiences.”
“Coogler had to bring the audience back into a further developed Wakanda and have everyone grieve over T’Challa together. On top of that, he had to create an entirely new world for audiences to connect with. He was able to construct a connection with those on the surface, and those underwater, who have experienced similar obstacles in their lives. The grieving process is shown through Namor and Shuri extremely well. Shuri has internalized her pain and sees death through a more scientific lens. Whereas Queen Ramonda believes in connectivity to the ancestral plain, and uses spirituality to comfort her. Namor’s grief is tied to a different emotion where he becomes vengeful over the protection of his people.”
Loading Comments...
%d bloggers like this: