Cathy Yan and Margot Robbie have found their Black Canary and Huntress. 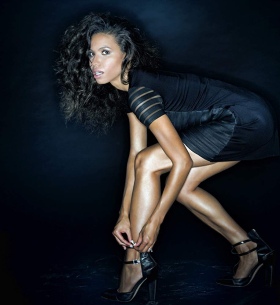 Jurnee Smollet – Bell will play Dinah Lance aka Black Canary. Dinah Lance is often portrayed as an expert in hand to hand combat. In addition to her martial arts skills, she is equipped with her sonic Canary cry (which will be shot in glorious IMAX) and a damn good investigator.

Mary Elizabeth Winstead will play Helena Bertinelli aka Huntress. Helena Bertinelli is a former mafia princess who was devastated at a young age when her family was killed in a mob hit, turning her into a vigilante.

Birds of Prey is set to be released on February 7th, 2020 with Robbie reprising her role as Harley Quinn. We are still awaiting the casting of Cassandra Cain’s BatGirl!

“#ElvisMovie highlights the two decades that #ColonelTomParker (#TomHanks) managed him. The film is narrated by Parker and it is truly the only way they could have done it. The only one close enough to #Presley was Parker, and we get to see that relationship. Presley was this wholesome American boy who suffered from stage fright before walking out on that stage. Parker knew he had it in him, and once he saw him on that stage, he knew exactly what he needed to do to rise to fame. If you know #BazLuhrmann, his style is pretty distinct. Viscerally, there’s so much flashy camerawork within the first fifteen minutes of this movie. And #Luhrmann set the tone of how extravagant Parker made Presley. There is no one else who could have made this biopic because of the amount of excess and flare he brought to it, to tell the King’s story.
“We meet Finney Shaw (#MasonThames) who is a shy but clever 13-year-old boy, who’s being held in a soundproof basement by a sadistic, masked killer named The Grabber (#EthanHawke). When a disconnected phone on the wall starts to ring, he soon discovers that he can hear the voices of the murderer’s previous victims — and they are dead set on making sure that what happened to them doesn’t happen to Finney. On top of that, Finney’s little sister Gwen (#MadelineMcGraw) has these visions that eventually come true. She can help the detectives find where The Grabber takes these young boys. Thames and McGraw are the stars of this movie because they compliment each other so well as brother and sister.
25 + 2 🎈
“In his original adventure, #BuzzLightyear (#ChrisEvans) embarks on an intergalactic adventure with a group of ambitious recruits and his robot companion. The story is straightforward and has many obstacles for Buzz along the way. #Lightyear is dedicated to the #SpaceRanger program and thinks that is what defines him at the beginning of this film. He has his best friend, Alisha Hawthorne (#UzoAduba) who is with him every step of the way. And in true #Pixar fashion, within seconds, we understand how strong their friendship is. Some beautiful, heartfelt moments between the characters show the importance of having the right support system around you. Once, Alisha’s granddaughter Izzy Hawthorne (#KekePalmer) comes into the mix, the pressure of fulfilling a legacy is also shown. In a way, Izzy and Buzz both help each other understand their place in the world.
“Three different storylines carry the lengthy two-hour and twenty-seven-minute runtime and none of them work. Normally the conversation around the genetic cross-mutation of the dinosaurs isn’t that difficult to grasp, but for some reason, they added another layer to the madness. They added a corporation called Biosyn and Lewis Dodgson (#CampbellScott) plans to regain some control. Then there are people trying to kidnap Maisie Lockwood (#IsabellaSermon) because of her genes. And a black market ring that keeps the dinosaurs around to do whatever they please. On top of that, the original cast comes back and takes up the entire storyline with Biosyn. What movie were they trying to make, exactly? If people can’t explain what happens in the movie and there weren’t even dinosaurs fighting each other, then what are people watching this for?
“#DavidCronenberg writes a story about humans who adapt to a synthetic environment. He shows that the body undergoes new transformations and mutations. Saul Tenser (#ViggoMortensen) and Caprice (#LéaSeydoux) are performance artists. Saul’s assistant, Caprice publicly showcases the metamorphosis of his organs. Meanwhile, a mysterious group, led by Lang Daughtery (#ScottSpeedman) tries to use Saul’s notoriety to shed light on the next phase of human evolution. The cinematography by #DouglasKoch in certain moments when Saul and Caprice were performing captured the voyeuristic way we consume physical expression. Koch and Cronenberg show the difference in scope when it’s performance-based, sexual expression or even for scientific purposes.
Loading Comments...
%d bloggers like this: